Green Up Day has increased our awareness about the world and environment around us. It is important that we know what is happening and that we take notice to save our planet. Green Up Day is still seen as a single day devoted directly to cleaning up our home, Earth.

What Was Different After the First Green Up Day

"We believe this was the largest statewide, voluntary, unified citizens' effort ever organized in Vermont...It greatly enhanced the pride of Vermonters in their state...It inspired many Vermonters to refrain from thoughtless littering on our highways...It set the stage for continuing clean up programs that have resulted in Vermont highways being known far and wide as the cleanest in the United States...It helped pass the bottle bill and a whole long list of other environmental legislation...It helped set the tone for what we proudly call our Vermont 'Special World' " (Pyles).

What People Say About Green UP Day

"Twenty years after the first Green Up Day, Vermont Green Up's president Leonard Perry noted that: Green Up is more than a day in May. It is an attitude for a lifetime—an attitude toward our environment that Vermont is a precious place deserving our care and respect" (Pyles). If this "motto" is seen and followed by neighboring communities it will transform our environment greatly. Just because there is one day devoted to cleaning and preserving our communities, does not mean that all the other "regular" days should be forgotten. Every person should carry the message of Green Up Day to every action, in every single day.

"Twenty-five years after the first Green Up Day, Chittenden County Chair John Niles wrote that "The Green Up ethic—Green Up Day—is valuable because it reminds Vermonters that we care how our State looks. It is also an example of communities working together... About the 66 tons of debris collected… This material is now off roadsides or waterways, and out of parks. There are aesthetic, environmental, and economic benefits to this cleanliness... A couple of years later, Wendy McArdle (Chittenden Co. Chr.) wrote: ...Organize a Green Up Day Team: we all learn the meaning of stewardship by participating in this State-wide litter cleanup" (Pyles).

Green Up Day Fights Back Against Litter! 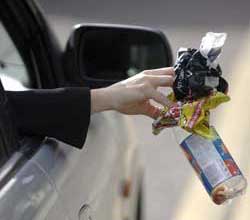 Someone littering out of their car window
Many of us may not even realize when we litter, or even what it is.  However, we can tell where litter may be found by reading these following situations.

"There are ten primary sources of litter:

1) Pedestrians dropping garbage in the street or gutters.
2) Motorists discarding garbage out of windows.
3) Uncovered loads. Items that are not secure can
easily be blown out of trailers and cause roadside
littering.
4) Household refuse disposal and collection.
Animal scavengers and the wind can dislodge unsecured
items placed out on the corner for collections.
Litter can also result from overloading containers.
5) Commercial refuse and disposal. Poorly secured
commercial refuse can easily become litter.
6) Construction projects. Litter can come from
uncontrolled building waste and workers' lunchtime
refuse.
7) People at leisure.
8) Entertainment events. Events create a large
amount of litter, which can overflow onto neighbouring
areas when measures to control it are not
carefully planned.
9) Illegal dumping.
10) Intentional or habitual littering, for reasons
such as laziness or acts of rebellion" (Littering).

What is Considered Litter?

"By law, litter is any discarded, used, or unconsumed substance or waste material made of aluminum, glass, plastic, rubber, paper, or other natural or synthetic material, including newspapers and magazines, which has not been put in a litter receptacle. The law bars anyone from throwing, scattering, spilling, or placing litter on private property he or she does not own" (Frisman).

~Litter costs money to remove. Various workers such as garbage collectors and volunteers must spend their time and effort that could be used to better the planet in other ways.
~Litter attracts bugs, insects, and rodents, such as mice. Bacteria can grow where there is litter, and make people ill.
~Litter such as cigarettes can be a fire hazard.
~By littering, you tell others that it is okay to litter to. That is why people tend to litter when they see it.
~Tourist locations will loose business when litter accumulates.
~Litter pollutes our water, even if it is organic matter like dog poo.
~Animals can get trapped in litter, suffocate, choke, and die.

Turtle Who Swallowed Plastic Bag
Every single one of those situations could be prevented if people did not litter.  Green Up Day participants should be proud of the work they accomplish.  Even if they only manage to pick up a few pieces of litter, they could be saving the life of an animal, or making someone think twice before throwing trash out of their car window.
In addition, as it varies across the states, fines for littering can range from as low as 50 dollars with a maximum of 30,000 dollars. As you can see, littering can have expensive consequenses, however, you can only be fined if you are caught in the action. For those lucky people, the people who don't get caught, Green Up Day contributes to the cleaning up of their trash and debris.

The change in fine prices for littering over the last few years
The message that this graph portrays is that the government and it's officials are getting more serious about the act of littering. They pair up with the message of Green Up Day to stop the destruction of the landscape and environment. They will not allow the public to contaminate the natural balance of our land!